Change came early on in Charing Cross’ existence, initially for the better. Under SER ownership, the terminus was a hub for Dover boat traffic, this naturally affecting receipts in the hotel. Thus, in 1878, the original 250 rooms were increased by a further ninety with the opening of an extension on the opposite side of Villiers Street, on the station’s north eastern elevation. The extension was linked to the main hotel, the latter designed by E.M. Barry, by an ornate enclosed footbridge. This was followed in 1887 by the widening of Hungerford Bridge by nearly 50 foot, which increased its track capacity from four to seven lines. Consequently, this saw the original Saxby & Farmer signal box taken out of use and a new one, similarly suspended across the tracks in the same location, brought into use in February 1888. Furthermore, platforms 1 and 2 could now be lengthened and skewed to accept the longer train formations. Opening with the then newly quadrupled section of track between Metropolitan Junction and Hungerford Bridge on 2nd June 1901 was a 54 foot turntable. Located on the South Bank, on the ‘’up’’ side of the Hungerford Bridge approaches, it was known as ‘’Belvedere Road’’ and used by those terminating engines from Charing Cross. However, at least to the general passer-by, the most significant change to the station in its earlier years was the replacement of the trainshed roof. On 5th December 1905, a weak tie rod connection failed at the river end of the trainshed, workers subsequently scrambling to safety to avoid any falling components. The effect of this took a number of minutes to transpire, but when it did, a progressive collapsing sequence from the Thames end of the structure ensued, which saw 70 foot of the 510 foot long structure fall to the ground, taking the upper layers of the supporting walls with it. Five deaths were resultants of this accident and although most of the trainshed remained intact, the SE&CR (as it had been from 1899) dismantled the remnants and installed a much more solid - although less imposing - ridge-and-furrow roof on partially rebuilt walls. The station was closed during this time, which in itself was convenient, for it allowed time for engineers to examine the strength worthiness of the railway bridge. By the turn of the century, heavier locomotives were being introduced, which became unsuitable for the comparatively weak structure of Hungerford Bridge. Initially, only a small number of additional girders were put in place, but this was far from adequate. After the station re-opened on 19th March 1906, restrictions were imposed which barred the larger locomotive classes from Hungerford Bridge and also saw that no more than two tracks upon the structure were under use simultaneously. It was not until 2nd August 1917 that the SE&CR finally secured Parliamentary approval for the strengthening of the bridge, having tried unsuccessfully in the previous year, but even then no major work was carried out.

Meanwhile, political trouble had been brewing. Charing Cross had two significant factors riding against it: 1) it was positioned at a strategically important location, this being considered the heart of London, where all external distances were measured from; 2) Hungerford Bridge was looked upon as a huge eyesore on the landscape, support having gradually been rallied over the years for its demolition. In particular, certain figures within the 1889-formed London County Council favoured the demolition of both the railway bridge and station: the former would be replaced by a road bridge, the latter would be superseded by a new terminus on the South Bank. After a consultation in 1901, the SE&CR were reluctant to push through such a scheme, although it would be the LCC which would have to provide the finance for a new terminus, as compensation for the move. It had only been in the previous year that the railway company had secured Royal Assent for the expansion of Charing Cross on both sides, which included the Hungerford Bridge, but unrest on the side of the LCC had seemingly delayed these proposals. With agreement between the SE&CR and LCC not being reached, the scheme was not pursued – for now.

The advent of the Southern Railway in 1923 heralded modernisation at the terminus. Fairly swiftly, the company began implementing signalling alterations, the first casualty being the 1888-installed signal box. This went out of use in August 1924 and for nearly two years thereafter, the layout was worked by a temporary signal box positioned within the apex of the diverging lines of platforms 2 and 3. During this time, four-aspect colour lights were put in place, the now obsolete 1888 signal box was demolished, and the signal cabin at nearby Waterloo Junction was dismantled and re-erected on the Isle of Wight, at Ryde St Johns Road. However, before the colour light system had been brought into use, yet another significant development was made. The ex-SE&CR’s suburban lines fell into the SR’s earliest electrification proposals with the ex-LSWR’s third rail system. Electric working from Holborn Viaduct and Victoria, to Orpington commenced as early as 12th July 1925, and this was then extended from the latter, up to Charing Cross on 28th February of the following year. The scheduled electric timetable came into force on the North Kent Lines on 6th June 1926, which at least solved one problem: bridge strength. Now that train weight was equally distributed among the carriages of EMUs, the operating restrictions of Hungerford Bridge could be overcome, strengthening work now not being essential. Colour light operation was brought into use on 27th June 1926; this included the commissioning of a new 90 foot long signal box, again straddled across the tracks in the same position as those cabins which preceded it. It was of simple all-timber construction, again reducing potential weight, and comprised 100 miniature power levers. Boat traffic had since been transferred to Victoria in 1920. 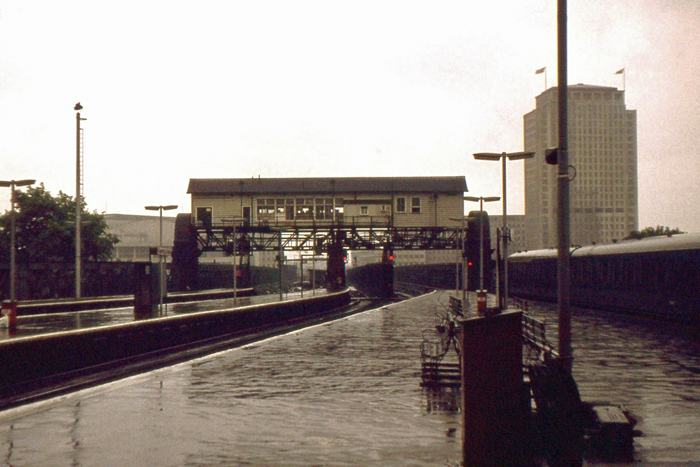 The signal box formerly straddled the tracks at the ends of the platforms and is seen here nearing the end of its operational life. It had come into use on 27th June 1926 with colour light signalling. It closed on 16th April 1976. © Roger Goodrum 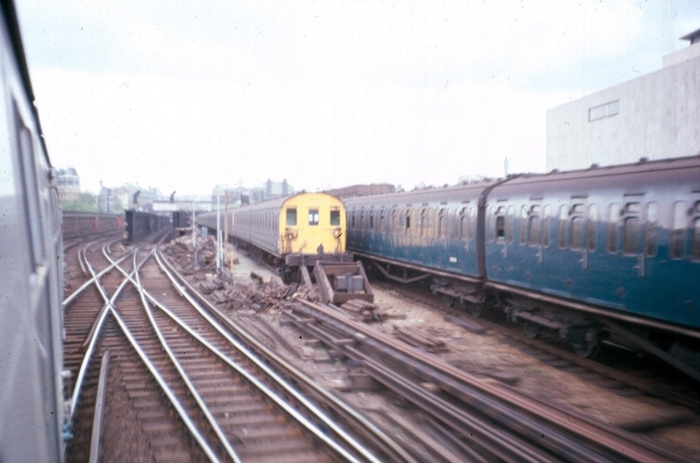 Approaching the terminus on the service from Dover, we see that a rolling stock siding once existed across Hungerford Bridge. On this occasion, it was packed to the gunwales with EPB Rail Blue suburban stock. On the right, Bulleid-designed EPB stock is in evidence. © David Glasspool Collection 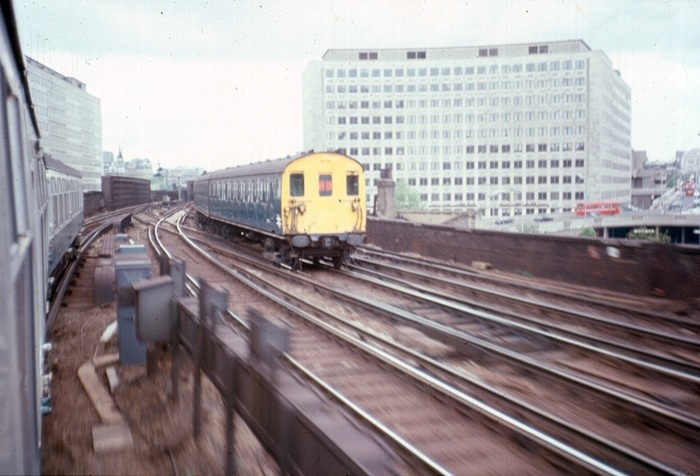 The Charing Cross approaches are again seen from an un-refurbished 4 CEP, this time working the 11:00 service to Dover. A BR-designed 2 EPB, in Rail Blue livery, is seen trailing another train as it heads into the terminus. © David Glasspool Collection 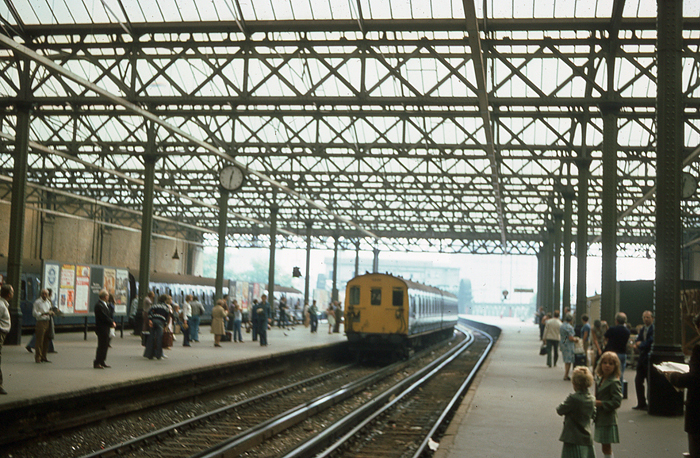 At 12:32, a service from Gravesend via Bexleyheath is seen arriving at platform 4. The SE&CR's trainshed latticework is seen to good effect in this view which, in the background, also includes the outline of the signal box straddling the tracks. © David Glasspool Collection 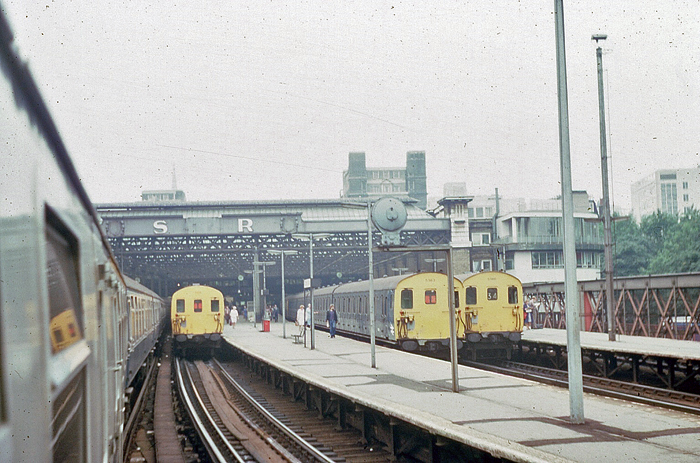 An EPB line-up is observed in platform line nos. 2, 3, and 4 under the SE&CR ridge-and-furrow roof. Those portions of the Charing Cross Hotel seen rising up in the background formerly boasted hipped slated roofs and ornate chimneystacks. These were bombed out during World War II and rebuilt in a completely plain style in 1951. © David Glasspool Collection