The year is 1843 and the South Eastern Railway has completed the construction of its Reigate Junction (Redhill) to Dover trunk line. Boasting an unrivalled link between the capital and the Kent Coast (there being no LC&DR in existence), the company deems it appropriate to begin developing its suburban network. The necessary impetus for this is given by the August 1844 agreement between the concern and the London & Greenwich Railway, which saw the former take out a 999 year lease on the latter’s metals. These extended from the capital’s first terminus, London Bridge, across an 878-arch viaduct to Deptford, then over Deptford creek into Greenwich. The SER would have preferred this line to form the beginnings of its own suburban route across North Kent (ultimately to Strood), but unfortunately for the company, the Royal Observatory had other ideas. Astronomy very much taking precedence over the then new form of transport, the railway was viewed as an ‘’interference’’ risk to the study of the skies. Thus, if the SER wanted to pursue its suburban ambitions, a new south-easterly entrance to the capital was required. In 1846, Parliament formally authorised modified plans presented by the SER; these still outlined a route laid roughly parallel with the Thames, passing through Charlton and Woolwich. However, of significance was the southward diversion of the line’s westerly end through Lewisham, which added a further 1½ miles onto the distance between London Bridge and Charlton, and required the boring of a 1681 yard long tunnel to the east of Blackheath.

On 30th July 1849, the SER opened the North Kent Line through Lewisham, Blackheath, and Woolwich, it subsequently continuing onto Dartford, Gravesend, and Strood. A station came into use at Lewisham from the outset, but unlike the site of today, the layout was merely a two-platform affair, being of no more importance or significance than nearby Blackheath. Indeed, this situation was to alter on the advent of the ‘’Mid-Kent Railway’’, the concern of which had been formed to forge a line to Beckenham. This was planned to spur off the SER’s suburban route at Lewisham, and be further extended to Addiscombe. On 1st January 1857, the double-track Mid-Kent Line came into use throughout to Beckenham, with Addiscombe being reached some seven years later. For this, the SER undertook a comprehensive rebuilding programme at Lewisham. This provided the station with four platform faces: the two existing surfaces served the North Kent Line, whilst a pair of additional platforms were installed for the Mid-Kent Line. The station laid immediately east of the diverging routes, which provided the SER with the opportunity to construct the main station building within the triangular apex created by the junction. Indeed, it was the subsequent decade which witnessed the railway company fabricating stations on the cheap (those on the 1866-opened Dartford Loop Line once serving as fine examples), thus Lewisham escaped with a permanent-looking structure, a type synonymous with the original route of 1849. The building was constructed using the now familiar yellow brick of the SER, complete with stone lining (as per Gravesend, Dartford, and Erith stations, to name but a few), five pitched roof sections, and a 68-foot façade. Interestingly, however, the main building was designed with just a single-storey, a feature which would seem to derive from the fact that the structure is triangular in nature. Copious rectangular canopies were provided on all platforms, these demonstrating the once common – and pleasing – SER valance design, this of which can still be seen in use at Blackheath. A clapboard platform structure was not absent, however, and such appeared on the ‘’up’’ Beckenham line platform, demonstrating an almost identical appearance to that which formerly resided on the ‘’up’’ side at Bexley. This suggests that it was perhaps a belated addition to the station. Finally, to the west of the platforms, sitting on the ‘’up’’ side next to the diverging lines, was a signal box of SER design. Two-storeys high, it was of typical clapboard construction, featuring a pitched roof and sash-style windows. It came into use approximately two decades after the Mid-Kent Line.

The SER’s woes caused by the Royal Observatory preventing an extension of the original Greenwich line may have been forgiven, for in 1852, the latter began using the railway company’s telegraph system to transmit Greenwich Mean Time. The transmission was centred on Lewisham station, which subsequently dispersed the signal to all other sites on the railway network. Those stations on a latitude which was the same as, or east of, Dover, were five minutes fast of Greenwich Mean Time. Going westwards to Winchester, Hampshire, times were five minutes slow, and by the time Truro in Cornwall was reached, the time was twenty minutes behind that of Greenwich. Transmission of the signal commenced on 2nd November, and eventually, clocks nationwide became synchronized on the same time.

Since the inception of the Mid-Kent Line, the station had been adorned with the name ‘’Lewisham Junction’’. An important interchange point between this route and the North Kent Line (the former having been extended to Hayes on 25th May 1882), the station has never been host to its own goods yard as such. However, some 450 yards to the east of the North Kent Line platforms did reside an interesting arrangement, which was once a common feature during the early railway age. Trailing off the ‘’down’’ line, in a westward direction, was a single siding, some 125 yards in length. Dedicated to goods traffic, this assumption is confirmed by the line’s termination at a diminutive wagon turntable (a familiar sight when both horse and human shunting of wagons was prevalent). This in turn fed two spurs, each 30 yards in length; the first of these continued parallel with the running lines for the whole of its extent, whilst the second skewed off at nearly ninety degrees. Of course, goods traffic for the SER’s inner London suburban network was amply handled at Bricklayers Arms, and indeed, proposals to expand the freight yard here emerged concurrent with the plans outlining a new engine shed on the Crayford Marshes (‘’Slades Green’’, as it would become known), in 1897. 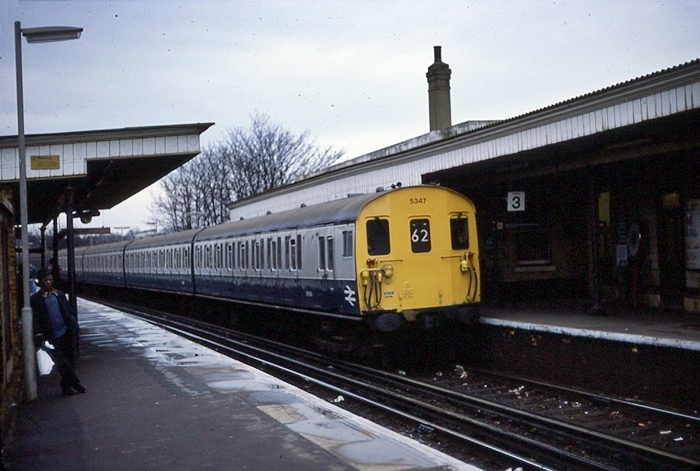 BR-designed 4 EPB No. 5347 trundles in with a semi-fast Charing Cross service from Gillingham, via Woolwich. © David Glasspool Collection 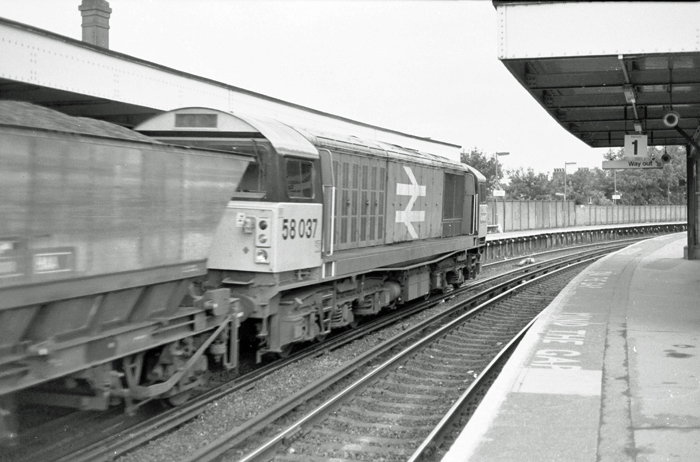 Prior to the rundown of heavy industry in North Kent and the virtual elimination of rail freight terminals on the South Eastern Division, Lewisham station witnessed a fairly constant stream of freight trains round the clock, with only short breaks during the morning and evening rush hours. Toton Depot-based Class 58 No. 58037 heads south through platform 2 with the 0929 (7O85) Silverhill Colliery to Northfleet BCI service, conveying loaded Merry-Go-Round coal wagons. © David Morgan 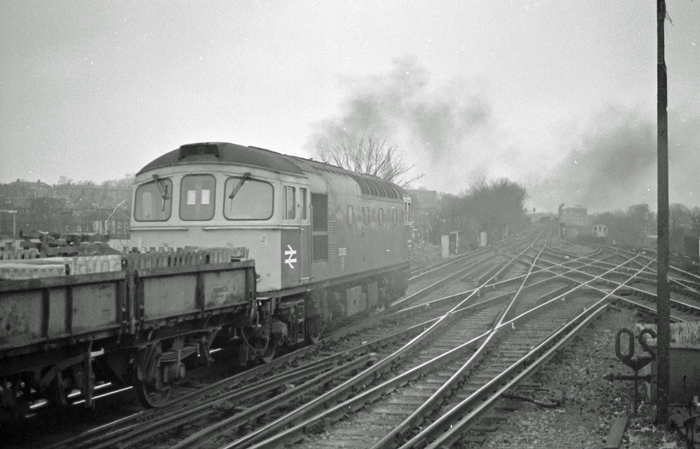 Full power is applied by Hither Green-based 33062, as it drags the heavily loaded 0910 (6M91) Sheerness Steelworks to Willesden Brent Sidings through platform 1 at Lewisham and heads across the junction and up the gradient towards Nunhead. This service, conveying only air braked wagons, also called at Ridham Dock and Hoo Junction before proceeding to Willesden, where traffic was re-marshalled for onward movement around the country. © David Morgan