Under Southern Railway ownership, major structural changes occurred. These were forced upon the company in 1924, when the SER ‘’up’’ side main building was destroyed by fire. As a result, in the following year, the SR constructed an attractive brick-built single-storey replacement. The styling was Mock Tudor, and the building was on a par with that at the 1883-opened Godstone station. The roof was based on the same basic design as those which appeared on the new station buildings at Dumpton Park and Broadstairs in the following year, complete with the SR’s characteristic belfry. At Penshurst, the replacement structure was accompanied to its west by a detached building which fulfilled the role of a waiting shelter. This, too, came complete with a pyramid-shaped tiled roof. Shortly before nationalisation, concrete lampposts were erected along the platforms, complete with affixed ‘’Target’’ name signs.

The British Railways era is a story of decline for Penshurst, as it was for so many stations. This began with the closure of the goods yard on 9th September 1963, but interest at the site was maintained in the form of steam-hauled services and mechanical signalling, the Redhill to Tonbridge route having avoided the modernisations brought by the Kent Coast Electrification. Steam generally disappeared from the route in January 1965, and six years later, so would much architectural interest. In 1971, in common with most stations along the line, the attractive SR main building here was bulldozed. The detached waiting shelter of the same origin remained, as did the SE&CR timber shelter on the ‘’down’’ platform. The Dutton & Co signal box of 1893 became the station’s most significant structure, until this itself was decommissioned on 5th March 1986, as a result of colour light signals coming into use. Finally, the only remnant of the SER station, the staggered platform arrangement, was also to disappear. In Spring 1990, the Government approved, at a cost of £19 million, the electrification of the Redhill to Tonbridge line. Work began during the same year, and at Penshurst involved the total abolition of the original ‘’down’’ platform. A completely new surface, comprising concrete cast components, was erected directly opposite the existing ‘’up’’ platform. This was equipped with a rectangular bus shelter, and the track foot crossing became redundant, being replaced by a footbridge at the eastern ends of the platform surfaces. Peculiarly, the SE&CR ‘’down’’ side timber shelter was not demolished as a result of platform closure, and this can still be seen emerging from the vegetation, albeit boarded up and with truncated roof.

Penshurst station appeared in the national press early on in it existence, being a feature in ‘’The Times’’ on 29th July 1845. On the evening of Monday 28th July 1845, it was the site of a crash. The 6:00 PM departure from Dover came to grief at the station at 8:49 PM, when a second locomotive ran into the back of the stationary train. Up to four of the carriages doubled up, and one was ‘’dashed to pieces’’. There were no fatalities among over 300 passengers, but thirty individuals were injured, one of which received a fractured leg, another a severely injured back. Bleeding and concussed passengers were taken into the station waiting room. The accident was said to be caused by the fact that red taillights were not attached to the rear of the train whilst it was stabled at Tunbridge (now ‘’Tonbridge’’). The rear vehicle on the train from Dover had been detached at Tunbridge (it being a ‘’Gentlemen’s Carriage’’ for that station), but the lights had not been removed from it and placed back on the continuing train, the latter of which was over thirty carriages strong. The decision had therefore been taken to dispatch a second engine from Tunbridge to take the missing lights to the train, and it was envisaged that this locomotive would overtake the service at Penshurst.

On Thursday 27th November 1919, a band of thick fog overhung London. This created visibility problems for the pilots of two biplanes, which were flying between Paris and London with the ‘’Airco Express Mail Service’’. The pair had departed Paris at 12:30 PM, but the aforementioned fog forced the pilots to land some distance short of the capital, at Penshurst. It was not all bad news, however: the mail carried by the aircraft was taken to Penshurst station and put on the next stopping express train, arriving in London at 4 PM. 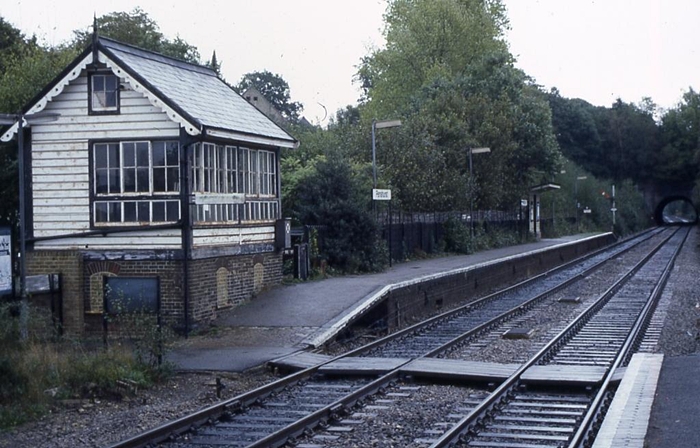 The following series of photographs have kindly been submitted by Peter Gibbons for inclusion on these pages.

A classic eastward view shows the original staggered ''down'' platform, once reached by the track foot crossing

in the foreground. Emerging from the vegetation can be seen the timber waiting shelter, whilst prominent in

the foreground, on the left, is the quaint signal cabin of the Railway Signal Company, dating from 1893. Of

note is the semaphore signal arm at the far end of the platform, which is mounted some way down its post. 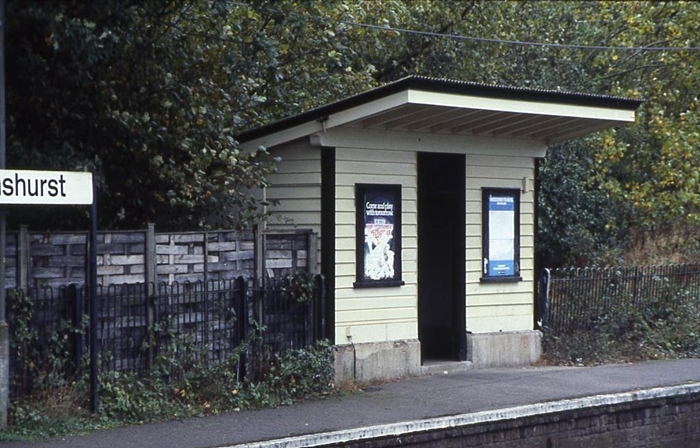 The charming ''down'' side timber shelter managed to survive the demolitions of 1971. It eventually went out

of use permanently after 1990, when a new platform was commissioned immediately opposite the original ''up''

surface. Nevertheless, as a later view shows, it remains in existence to this day. Peter Gibbons 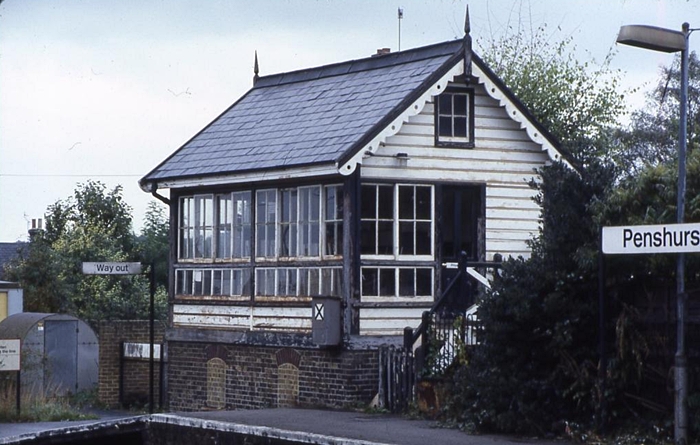 At the time of this view, the signal box was ninety years old, but had just three years left until its complete