It is difficult to imagine that a station once existed here. Comparatively recent earthworks in connection with the CTRL project have seen that any trace of the track bed has been completely obliterated. Only an isolated house, once the residence of the Station Master, and some nondescript railway cottages, remain as a testament to what was once Southfleet station. The site joined Rosherville as one of two intermediate stops on a five-mile double-track branch between Fawkham Junction – 2¼-miles east of Farningham Road – and Gravesend, which cost £250,000 to build (£18,789,000 at 2008 prices). The line had received Royal Assent on 18th July 1881, on the forming of the ‘’Gravesend Railway Company’’. This nominally independent concern was subsequently absorbed into the much larger LC&DR in 1883. Passenger traffic commenced on 10th May 1886, even though the branch’s formal opening ceremony had been on the 17th of the previous month.

The defining feature of the intermediate stations on the route was the single island platform, in which the double-track was gently slewed either side of the surface. This arrangement was presumably settled upon due to the nature of the sites, the stations being situated within restrictive cuttings where an island platform could economise on space. The island at Southfleet measured 530-feet in length and was accessed from the south by means of a twin-span staircase – with accompanying iron railings – emanating from the above road bridge. Upon it resided the main station building, an elongated but unassuming affair, measuring about 135-feet in length. Single-storey, the structure was constituted of yellow brickwork and comprised a slated pitched roof complete with overhang and pyramid-type sloping ends. Of the stations which originally opened with the branch, Southfleet was by far the most plain architecturally, possibly because it was an isolated spot located far from the splendour of Victorian Gravesend, then famous for Continental shipping and Rosherville Gardens. Nevertheless, the brickwork type was at least common to all stations on the route, and this still constitutes the surviving Station Master’s house at Southfleet. The latter was built upon a plot of land to the west of the railway cutting, running parallel with the island platform. Two-storeys high and demonstrating gabled roof sections, the house was evidently built to a standardised design, for a virtually identical structure was similarly provided for the Station Master at Rosherville. The house at Southfleet was accompanied to its south, on the opposite side of the road, by two pairs of semi-detached railway cottages.

Freight traffic was destined to outlast passenger services on the branch. Four Gravesend-facing goods sidings were in evidence north of the island at Southfleet, on the ‘’down’’ side of the line. The layout was controlled from a quaint two-storey-high signal box, located opposite the goods yard on the ‘’up’’ side of the line. This comprised a brick base, a timber upper half, and a gabled pitched roof. As per the Station Master’s house, it was built to a standardised design, a more or less identical example (albeit of all-timber construction) having also come into use at the line’s terminus. Both cabins were the work of the contractor ‘’Railway Signal Company’’ (a concern which became well known for its work on SER lines), hired by the LC&DR to signal the Gravesend branch.

On the advent of the Southern Railway, the station became ‘’Southfleet & Springhead’’. Little else changed at the site, although cosmetic alterations were made: during World War II, all posts/struts upon the platform were painted in a black and white striped scheme as a blackout precaution. This was a common practice at several stations within the London and South East area, and helped drivers locate sites at night, since any form of external lighting was prohibited. Station name boards were also removed, a precaution against the threat of invasion. The branch stumbled into British Railways ownership in 1948, but withdrawal of passenger services was not far off. Southfleet & Springhead had so far been more fortunate than the station at Rosherville, the latter of which had ceased to serve passengers as early as 16th July 1933. Traffic had for long been light and from the outset, the SER’s North Kent route from Charing Cross had offered a mileage to Gravesend of 24, versus the 27½-miles of the LC&DR branch. A decline in traffic under SR tenure could, in part, be attributed to electrification of the Gravesend Central route in July 1930. The end for passenger services on the Gravesend West branch came on 3rd August 1953, but freight traffic continued to use the route thereafter. As a result, the goods yard at Southfleet did not formally close until 11th June 1962, all major station structures still remaining intact at this time.

The line to Gravesend West closed to all traffic on 26th March 1968, but in the same year, new works began at Southfleet. The Associated Portland Cement Manufacturers (APCM) took out a lease of the former station site, which was to become host to a coal distribution depot for nearby cement works (notably Northfleet and Swanscombe). By September of that year, a giant coal hopper had been completed upon the former goods yard site and a wagon tippler brought into use on what was the ‘’down’’ station loop. 1,100 yards of track was still extant north of Southfleet, and was used by APCM for wagon storage. The track bed beyond there remained in British Rail ownership for the maintenance of a 33,000-volt cable between Northfleet Grid and Fawkham Junction substation. This had no connection with the branch line itself, but was used to feed electricity to local substations along the main line, the latter of which would then convert the supply down to 650 Volts/750 Volts DC.

A later addition to the site was a single-track prefabricated engine shed, erected at the northern end of the site, which had a trailing connection with the branch. This was in place by 1972 and housed ACPM’s own shunting locomotive, a Sentinel 0-4-0 diesel hydraulic. Perhaps the chain system for winching wagons onto the tippler had become too unreliable or time consuming, and a diesel shunter was seen as the most practical solution. Built in 1966, the shunter was works No. 10260 and housed a 325 HP Rolls Royce engine. This locomotive was still in use in 1994, having found its way to the Rugby Cement Works, Barrington, Cambridgeshire.

Trains from the Nottinghamshire coalfields were brought down to Southfleet behind London Midland Region motive power, encompassing Classes 20, 25, 31, and 45. Native Class 33 diesels were to be seen on the line once daily, arriving to remove empty coal wagons. The latter were hauled to Shepherds Well, in the heart of the Kent coalfields. At this time, a signal box remained in use at Farningham Road and the signalman there would alert the shunter at Southfleet of an incoming coal train. Similarly, the shunter at Southfleet would communicate with the signalman when a return train left the depot. Rules imposed at the coal depot decreed that main line locomotives were not permitted to pass through the tippler. In addition, the Sentinel shunter could not be operated at the same time a BR locomotive was in action, and had to be stabled out of use on the cripple siding. In 1976, coal traffic to the depot ceased and Fawkham Junction was taken out of use. The giant green coal storage hopper survived until 1982, when it was demolished, but the tippler and track were still in situ three years later.

As earlier mentioned, it is today surprising that a station or coal depot once existed here, given the later extensive re-landscaping enacted. On 5th October 1998, heavy earthworks were begun upon the former course of the Fawkham Junction to Southfleet section of the Gravesend West branch. This was to create a re-aligned track bed for a double-track connection between the ‘’Chatham’’ main line at a new ‘’Fawkham Junction’’, and ‘’Section 1’’ of the CTRL. At Southfleet, a completely new cutting was formed, which involved dumping much of the excavated earth within the cutting once occupied by the ex-LC&DR branch. The underside of the road bridge was completely in-filled and new structures built upon the former site of the island platform.

With thanks to David Morgan, who has provided much material on Southfleet Coal Terminal.

Southfleet & Springhead track plan, as of 1938. The present day positioning of the CTRL spur, outlined in grey, has been included, to show its location relative to the former station site. Click the above for a larger version. Drawn by David Glasspool

Southfleet, after the the addition of an engine shed to the APCM coal depot layout. To the south, the track singled immediately beyond the road bridge. Drawn by David Glasspool 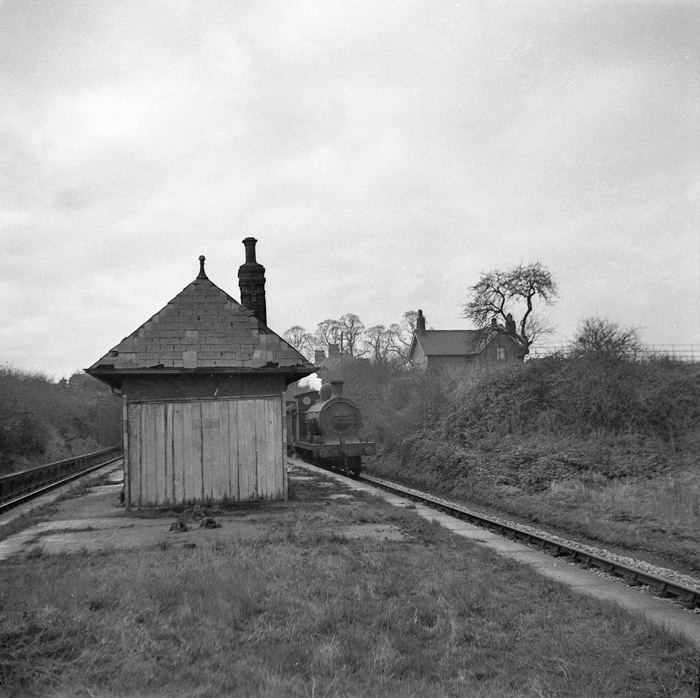 The station building had fallen into a state of disrepair by the time "C" Class No. 31691 was seen passing by the island platform, Gravesend West-bound, after the line was closed to passenger traffic. To the top right can be seen the former Station Master's house, which existed until 2013, when it was demolished and replaced by a mansion. © David Glasspool Collection 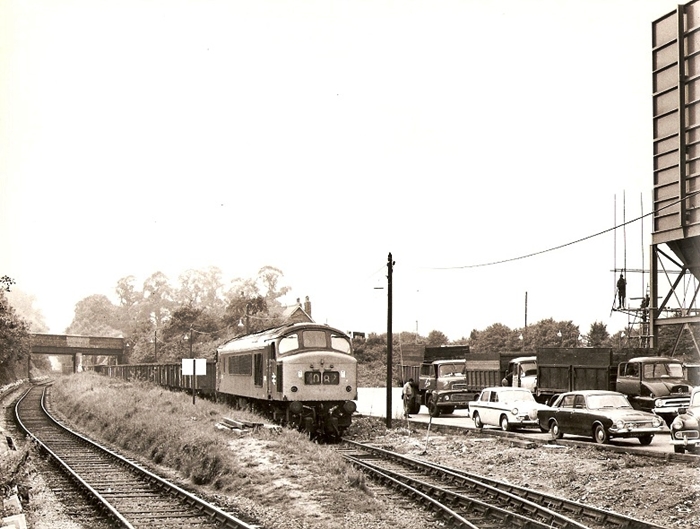 View looking south past the remains of the former platform towards Station Road bridge, with the patch of new brickwork on the bridge parapet indicating the position of the station entrance. The class 45 loco has just arrived from the London Midland Region with what may have been the first coal train to be unloaded at the new APCM Coal Terminal. The loco has been detached from the train and is about to move over the crossover onto the former ''up'' loop; it will then run round the train and push the wagons towards the tippler which is behind the photographer. Note the scaffolding still being dismantled from around the new coal storage hopper, constructed in the former goods yard. © David Morgan Collection 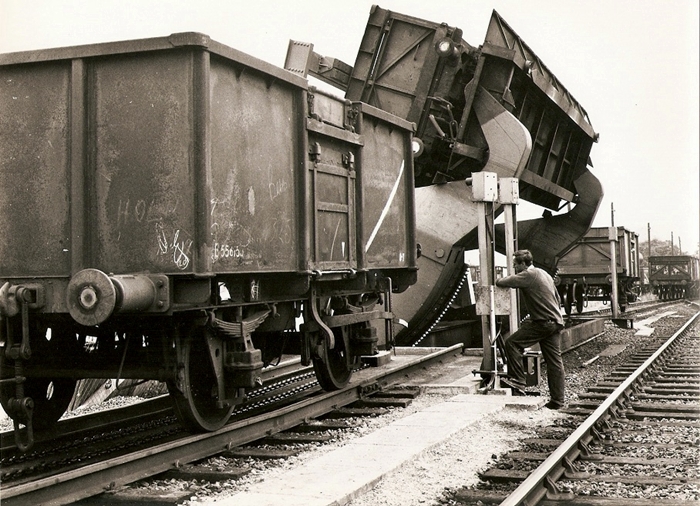 Here the rather slow unloading process is underway, with each wagon being uncoupled before being winched by means of a capstan and chain operated mule onto the tippler. The mule ran on a narrow track between the running rails and was attached to the loaded wagon before being hauled towards the tippler by the chains seen below the wagon in this picture. An excellent view of the mule can be seen in the 1985 photo on the third page. Note the inclined section of track leading up onto the tippler and the siding falling away in the distance which suggests that the empty wagons were moved away by gravity before being re-coupled prior to departure of the train. © David Morgan Collection 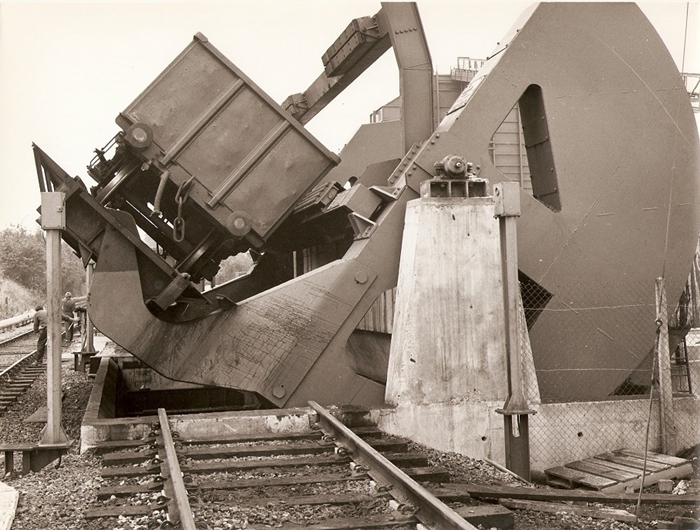 A view showing the north end of the tippler with a 16T vacuum braked mineral wagon being rotated for discharge. Note that the wagon does not appear to be secured to the tippler during the unloading process, restraint being provided by the padded beams to prevent it from falling into the hopper pit below. © David Morgan Collection