This class formed part of a large production run of American shunting tank engines, designed to operate on the railways of Europe after D-Day. The urgency in which they were required led to the quite astonishing feat of a brand new locomotive design being completed and ordered within a single week. The type has its origins with Colonel Howard G. Hill, formerly a mechanical engineer with the Southern Pacific Railroad. During 1940, he was drafted in by the US Army’s Office of the Chief of Engineers, specifically to accelerate a programme of mass railway locomotive and rolling stock construction. In the following year, the US’ entry into the war seemed imminent, and in November 1941, liaison with the UK War Department over supplying the latter with motive power hastened the development of a new tank engine. Early in November, Hill worked long and hard to pencil a locomotive from scratch, and in under a week produced a complete set of drawings. The resultant 0-6-0 Tank locomotive, whilst intended for use on the other side of the Atlantic, was typically American in appearance, with a plethora of external boiler fittings, cast steel bar frames, and no running plates. Time was of the essence and consequently, the US Army immediately approved the design for large-scale production – this was in the absence of a single prototype. The design was formally coded ‘’T1531’’ by the US Army, and a total of 450 examples were authorised for construction.

The order was subcontracted to three American firms, namely H. K. Porter, Davenport, and the Vulcan Iron Works. H. K. Porter of Pittsburgh, Pennsylvania, had a distinguished history as a specialist builder of industrial steam locomotives, and the US Army contract was a fitting swansong for a trade in its death throes. Whilst the war provided a much-needed boom in work for the firm, the dearth of locomotive orders thereafter saw engine building at H. K. Porter cease in 1950. The firm, which had suffered bankruptcy in 1937 and had subsequently been incorporated as a new company in January 1939, continued to manufacture industrial machinery; its locomotive building assets were sold to Davenport. As per H. K. Porter, the 1942 order was to prove somewhat of a final fling for the Davenport Locomotive Works of Iowa. In spite of acquiring the locomotive interests of the former in 1950, production at Davenport ceased six years later. Finally, the third contractor, the Vulcan Iron Works, was a Pennsylvania corporation, having its principal place of business at Wilkes Barre. The company’s locomotive building business was also nearing life’s end, production there ceasing earlier than that at Davenport, in 1954. In spite of the sad end to once thriving companies, their production of Colonel Hill’s engine was swift, and examples were arriving at Newport Docks, Wales, from ‘’across the pond’’ in July 1942.

Delivered in near complete form, engines were unloaded from the decks of ships and towed dead to GWR sheds in the vicinity, where the motion gear was fitted. At some of these depots they were temporarily used as shunters, whilst others were loaned for a short period to the Welsh Collieries. Several of the Class ‘’S100’’ 0-6-0T engines, as they had been formally classed by the US Army Transportation Corps (a subdivision of the army which had come into existence on 31st July 1942), were taken out on a lend-lease agreement by the UK War Department. Engines were ‘’run-in’’ and steam tested, and whilst many were sent on their way to mainland Europe, several went into immediate store in Britain. Some of these stored engines were, too, shipped out for use on the continent in June 1944, again via Newport Docks. Examples were eventually dispersed throughout Western Europe, North Africa, and the Middle East. Forty-two of the ‘’S100’’ engines which remained in the UK were lined up in open air store at Newbury Racecourse station, on the GWR.

In 1945, Lieutenant Colonel Howard G. Hill was awarded the ‘’Legion of Merit’’ in recognition of his services to the US Military. In the same year, the Southern Railway faced a conundrum. Several of the company’s shunting engines at Southampton Docks were nearing expensive boiler overhauls. These were the ‘’B4’’ Tanks, originally introduced in 1891 by the LSWR under William Adams’ direction. They were compact engines running on a short wheelbase, necessary to negotiate tight curves in dock areas. Further engines of this type had been ordered after the LSWR took full control of Southampton Docks in November 1892, thus by the end of World War II, these tanks were over half a century in age. Indeed, they had been complemented in 1908 by a further batch of ten engines built to a modified design under Dugald Drummond. Nevertheless, with the end of the war in sight, SR locomotive building policy was upbeat, Bulleid having set the ball rolling with the introduction of the first ‘’Merchant Navy’’ Pacifics in February 1941. Between 1945 and 1947 (inclusive), it was proposed to construct seventy new steam engines, fifty of which were to be Bulleid Light Pacifics, the remainder comprising a mixture of passenger tank engines and dock shunters. The latter were to supersede the ‘’B4’’ Tanks at Southampton, but a new-build programme for this type of engine was suddenly put on hold; numerous War Department locomotives had been identified as possible replacements.

There were two types of wartime engine on offer: the aforementioned U.S.A. Tanks in store at Newbury Racecourse, and a British equivalent, the 0-6-0 ‘’Austerity’’ Saddle Tank. Several of the latter were lined up in open store at the Longmoor Military Railway, Hampshire, and like their American counterparts, had seen little, if any, use. R. A. Riddles of the LMS had been called upon by the Ministry of Supply to head a design team for a heavy shunting locomotive. The specification set out was for an engine which could haul a 1000-ton train from a standing start, on the level, and operate over tracks in varying states of repair. They needed to be capable of two years continuous intensive use. An order for 377 of these engines was subcontracted to the Hunslet Engine Company of Leeds, and as per the U.S.A. Tanks, many were shipped to the continent for use after the Allied invasion. Indeed, the Hunslet Company subcontracted its own order to other firms to speed up construction time, notably: Andrew Barclay Sons & Co; Hudswell Clarke; Robert Stephenson & Hawthorns; the Vulcan Foundry; and W. G. Bagnall. 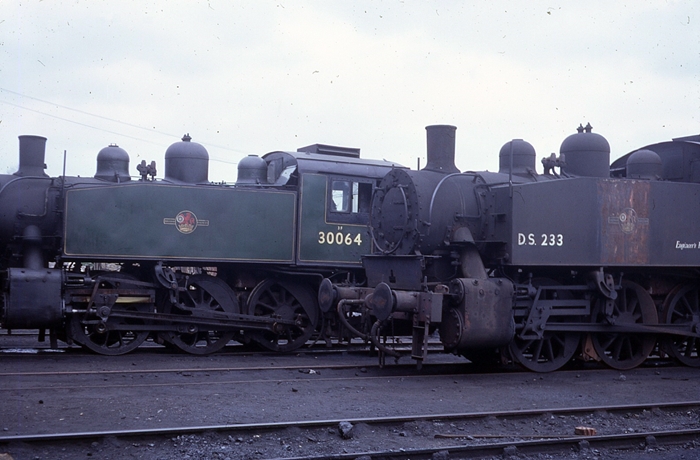 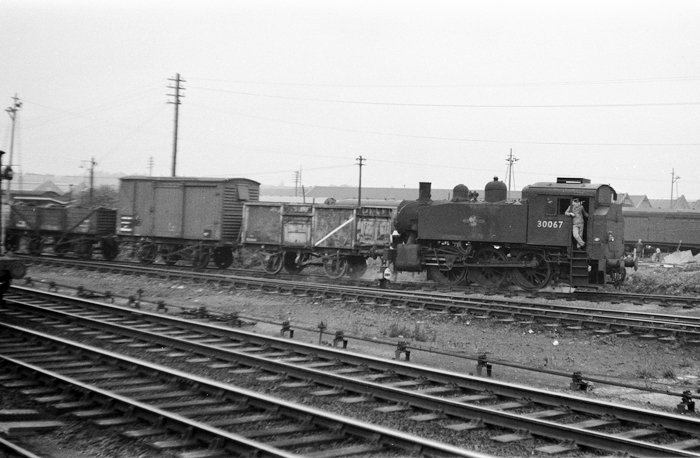 In 1964, ''Yankee Tank'' No. 30067 was seen shunting at Eastleigh, the huge works buildings forming the backdrop. Built by the Vulcan Iron Works, Pennsylvania, in 1942, this engine became WD 1282. On purchase by the SR, it was extensively modified and renumbered 67, entering service with that company in May 1942. Renumbered yet again by British Railways to 30067, it lingered around Eastleigh as a shunter after being ousted by diesels at Southampton Docks in 1962. However, it remained in the mainstream BR fleet, thus did not gain a Departmental Stock number. It survived right up until the end of steam on the SR, on 9th July 1967, and was one of five U.S.A. Tanks allocated to Eastleigh at the time. © David Glasspool Collection 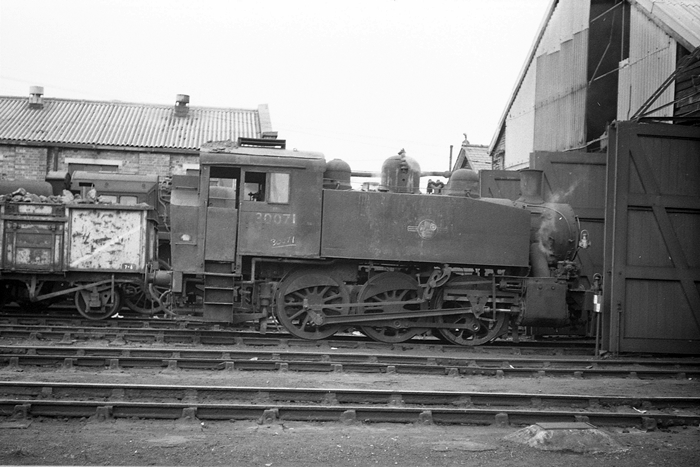 No. 30071 is seen outside Eastleigh shed in 1965. This engine remained in service right to the end of steam on the Southern, 9th July 1967. It then made its way to Salisbury, where it was stored, before being dispatched to South Wales for scrapping. © David Glasspool Collection