Although the LSWR’s main line to the west was commissioned between Yeovil and Exeter on 19th July 1860, this diminutive site was a much later addition. The station’s existence appears to be two-fold. The story begins in 1904 with the dissolving of Exeter United F.C. and the acquirement of its assets by local non-professional side St Sidwell’s United F.C. The acquisition included the lease of the former’s ‘’Bradford’s Field’’, which rested on the southern side of the railway cutting in the parish of St James, and consequently saw St Sidwell’s being renamed ‘’Exeter City F.C.’’. The playing surface was owned outright by local butcher Albert Bradford (hence ‘’Bradford’s Field’’), whom had previously used it for fattening pigs. To the club, it was known as ‘’St James Park’’. The first home game took place on 10th September 1904, with a crowd of 600, and by the end of the season the club had won the East Devon League. Since the club had been gathering momentum from 1904, the LSWR had been pondering how to provide an improved local railway service. By the turn of the century, tramway networks had begun to expand rapidly, and these could offer greater service frequency, in addition to more convenient stopping points. This was not a unique phenomenon experienced by the LSWR; the GWR had been similarly hit by tramway mania in numerous parts of its western territories, and the SE&CR was experiencing similar hardships in the South London suburbs. Consequently, on 26th January 1906, the LSWR commenced operation of a railmotor service between Exeter Queen Street and Honiton, this forming the company’s steam version of the tram.

Two new halts were opened in the January in connection with the railmotor, reflecting the LSWR’s endeavour to provide a more ‘’local’’ service, as per the trams. The first of note was that of Mount Pleasant Road Halt, which was positioned at the eastern end of the 263 yard long ‘’Blackboy Tunnel’’, in sight of Exmouth Junction. The second halt was that of Lions Holt, located in the deep cutting immediately beside Exeter City’s football field, west of Blackboy Tunnel. Both halts were wooden platform affairs, and that at Mount Pleasant Road was a somewhat short-lived venture. It was subject to closure on 2nd January 1928, the railmotor era now being over, but the existence of Exeter City F.C. ensured that Lions Holt Halt would remain on the railway map.

In the years leading up to the Exeter Queen Street station rebuilding of the early 1930s (the then newly-christened Exeter Central formally opening on 1st July 1933), Lions Holt was subject to reconstruction. The two platforms re-emerged in a new, and now familiar guise: prefabricated concrete construction had been used throughout, and pitched-roof waiting shelters of this material had also appeared on both platforms. The ‘’up’’ platform measured a meagre 114-feet in length, whilst the ''down'' platform was built to more than double this, extending for 244-feet. Each surface was accessed by means of a short, steeply-graded footway from the above road. Naturally, the concrete components had not come far; these had merely been transported through Blackboy Tunnel, having been manufactured at the SR’s own Exmouth Junction Concrete Works. Even the platforms had concrete fencing lining their rear elevations. Thus, Lions Holt Halt remained LSWR thereafter only in name, but the SR strived to make this harmonious with the adjacent football ground. From 7th October 1946, the station was known as ‘’St James Park’’. The football club had since purchased their playing ground outright in 1921.

The station led a quiet existence thereafter, and after the infamous Western Region degrading of the lines west of Salisbury, completed in July 1967, the site was served only by Exmouth branch services formed of diesel multiple units. However, its character remained wholly of SR origin, its prefabricated concrete platforms, shelters, and fencing still standing proud. This was to change circa 1998, when a station rebuild resulted in the demolition of the waiting shelters. Unsurprisingly, the replacement of these came in the form of the long-dreaded bus shelter structures, and the ‘’down’’ platform received a new, low-level brick wall lining the rear edge. Concrete fencing, however, still survives on the ‘’up’’ side. 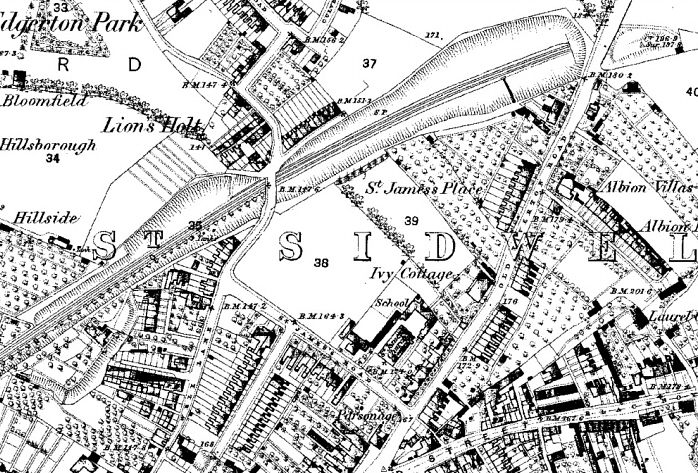 This 1889 map, kindly submitted by Neil Le Milliere for inclusion, depicts the St James' parish but, of course,

no halt. Click the above image for a larger version. Neil Le Milliere 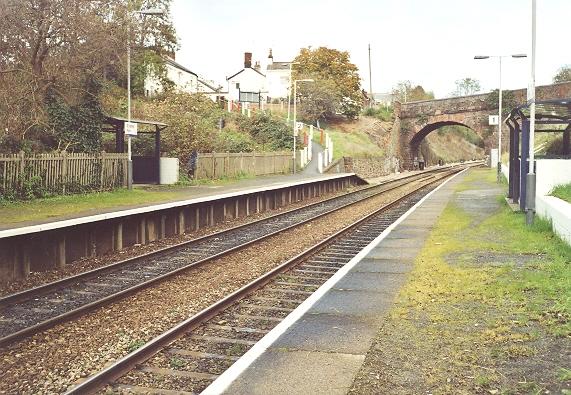 A north-eastward view from platform level reveals the bus shelters of the late 1990s, the

Exmouth Junction-manufactured platform surfaces and concrete fence, and the steep

walkway of the ''up'' side. David Glasspool 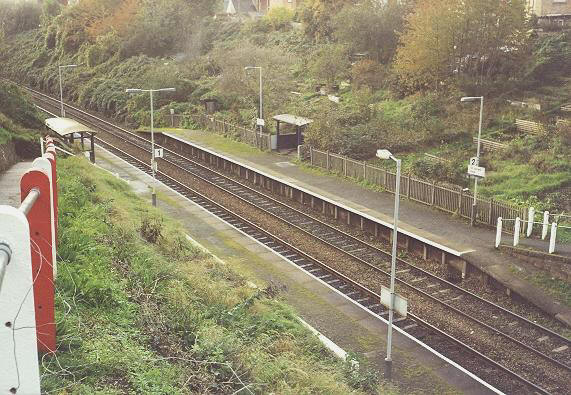 the platform approach paths are. Allotments occupy the land behind the ''up'' platform. 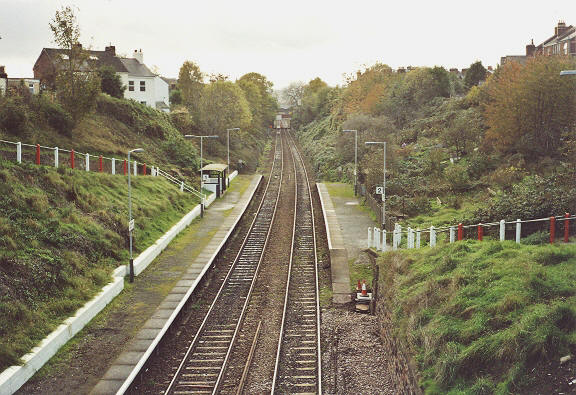 two platforms of varying lengths. That on the left (''down'' side) can accommodate three

vehicles, whilst that opposite can only comfortably accommodate one. David Glasspool 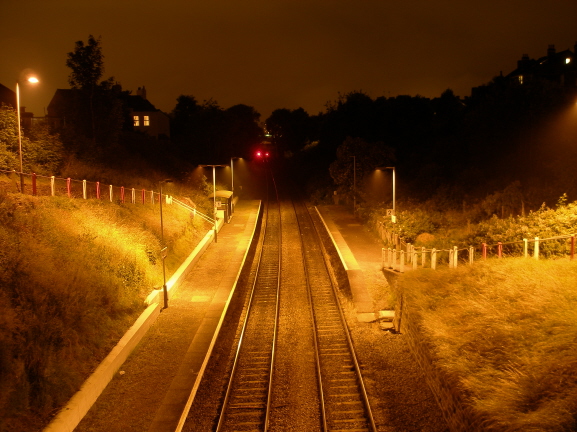 A second view from the road bridge, this time on the night of 14th June 2007, reveals in the

distance the red aspect lights of the shunt signals on the Exeter Central approaches.