The LC&DR commenced through running between Victoria and Canterbury on 3rd December 1860, but a station at Swanley was a later addition. Before the arrival of the LC&DR, the area was non-descript and rural, like so many places prior to receiving any form of rail connection – simply flowing fields and farmland. The village of ‘’Swanley’’ (now known as ‘’Swanley Village’’) was, however, in existence, with a small number of inhabitants, and resided ¼-mile north of the line. It was the advent of the independent ‘’Sevenoaks Railway’’ in 1859 that prompted proposals for a station in the area. The company had been formed by an Act of Parliament to construct an appendix off the LC&DR’s main line (which had, at that time, yet to be fully completed), to Sevenoaks. The line came into use on 2nd June 1862, and trains worked through to a station on the market town’s outskirts, at Sevenoaks Bat & Ball – opposition from local landowners had prevented the company from establishing a more convenient site. As part of the Sevenoaks line project, the LC&DR commenced construction of a large station at the junction between the branch and the main lines, but the building work was still in progress when the first scheduled services commenced to Bat & Ball. As a consequence, the station came into use a month later, on 1st July 1862. It was known as ‘’Sevenoaks Junction’’ from the outset, and resided over a mile west of Swanley Village.

The station was constructed beyond the junction, which saw the provision of four platform faces: two for the straight-running main line, and a pair for the curving double-track of the Sevenoaks branch. The advantage of this layout, over one with the station positioned before the divergence of lines, was that it kept branch line services out of the paths of non-stop trains. The main building here was an unassuming one, positioned upon the central triangular platform surface in-between the diverging routes. Single-storey, it was constituted of the LC&DR’s favoured crème brick, which was used extensively in the construction of those stations along the company’s trunk line to Dover. Complete with a slated pitched-roof, the building tapered at its London end, following the triangular nature of the platforms. Adjacent to its London elevation was an independent brick-built block, featuring a sloping corrugated roof, which housed toilet facilities. Upon the ‘’up’’ main line and ‘’down’’ branch line platforms, there was no form of platform weather protection – the entire station was devoid of proper canopies. However, those passengers on the outer-most platform surfaces were fortunate, for timber waiting shelters were provided, complete with wrap-a-round sides. These were essentially based on the same design as those shelters which emerged at Sevenoaks Bat & Ball and Eynsford stations. In addition to lacking canopies, the station was also without a footbridge, and all platforms were linked at their London ends by track foot crossings. Nevertheless, the Station Master had the luxury of a spacious two-storey house, located upon the hill to the east of the station.

The Junction station’s goods facilities were established around the departing Sevenoaks line, and were separated from the station by a road bridge. Three sidings were laid along the ‘’down’’ side: two of these were eastward-facing, linked with each other at their London ends by a pair of wagon turntables. The northern-most siding passed through a pitched-roof, brick-built goods shed, and this track also provided a headshunt for the third, westward-facing siding. On the ‘’up’’ side of the branch tracks existed a single westward-facing refuge siding; for branch line trains, a 44-foot 8-inch locomotive turntable was provided. A water supply for locomotives came in the form of a three-storey-high water tower, positioned at the ‘’country’’ end of the ‘’down’’ branch line platform, complete with water columns.

On New Years Day 1871, the station became ‘’Swanley Junction’’. It appears that around the time of service extension along the original Sevenoaks line to Ashford in 1884 (the spur to Maidstone having been commissioned ten years earlier), Saxby & Farmer was contracted to re-signal the layout, involving the erection of two signal boxes. The first cabin was built at the London end of the ‘’down’’ platform, to a design identical to that which can be seen on the Westgate-on-Sea pages. This signal box controlled the junction; the second was erected alongside the incoming Sevenoaks line, beyond the road bridge, to control the goods yard layout. Further – and significant – changes were enacted under SE&CR auspices, as the company strived to improve station facilities. In about 1905, a two-span lattice footbridge was erected across the London ends of the platforms, crossing all four tracks and superseding the track foot crossings. Towards the end of the 19th Century, the Board of Trade began implementing more stringent safety criteria, which included the replacement of track foot crossings at a number of locations, particularly those upon busy sections of line. The footbridge was unusual, for the lattice pattern which was suspended above the branch tracks was of the design still found today at Kearsney, whilst that above the main line tracks was more akin to the footbridge in use at Sole Street. The track foot crossings remained in existence here for use by staff. Shortly before World War I, the main station building became host to a copious canopy, surrounding all sides except the eastern elevation. This protected both ‘’up’’ main line and ‘’down’’ branch line platform faces; the building’s road approach elevation was fitted with an independent porch canopy. A roof was also installed upon both spans of the footbridge at this time, including the staircases.

Goods facilities were also enhanced by the SE&CR: an additional eastward-facing siding was laid north of the goods shed, on the ‘’down’’ side of the Sevenoaks line. Coal staithes were brought into use behind the goods shed, and a further refuge siding was commissioned. The latter was sandwiched in-between the end of the ‘’down’’ branch platform and the road bridge.

Changes under the Southern Railway began with the installation of swan neck lampposts upon the platform surfaces, complete with target name signs. As part of the company’s endeavour to electrify the ex-SE&CR suburban network, third rail was extended along the ‘’Chatham’’ main line from Bickley to Swanley, and subsequently taken down the Bat & Ball branch, to join up with the electrification of the Tonbridge Cut-Off Line at Tubs Hill. Scheduled electric operation to Sevenoaks, via both routes, commenced on 6th January 1935. The SR later planned an extension of this scheme, for implementation in 1939, taking third rail beyond Swanley, to the end of what was considered the suburban operating area, at Gillingham. A new electric timetable for the route was based on splitting fast services from London at Swanley Junction, respective halves of the original formation dividing for Gillingham and the Sevenoaks route. Indeed, the reverse would also occur, these separate portions once again joining at Swanley for the run back to London. Issues of practicality were, however, raised, since the existing station was positioned beyond the junction. Therefore, a two-coupled unit formation would have to divide seemingly in limbo, before reaching the platforms, blocking the main running lines in the process. As a result, excavation work began in 1938 to widen the railway cutting to the west of the existing station, before the junction, to accommodate a completely new layout comprising two island platforms serving four tracks. The new layout came complete with its own SR-designed ‘’glasshouse’’ signal box, which took over from the existing Junction station’s Saxby & Farmer cabin on 31st May 1939; the goods yard’s signal box had previously closed on 19th of the same month. The new station, named plain ‘’Swanley’’, came into use on the commencement of electric services to both Gillingham and Maidstone, on 2nd July 1939, replacing the existing Junction station (which had also been known just as ''Swanley'' from 16th April 1939 onwards). Subsequent demolitions at the Junction station site left the main station building, water tower (complete with tank), and ‘’up’’ main line platform face intact, and these remained in existence for another quarter of a century. 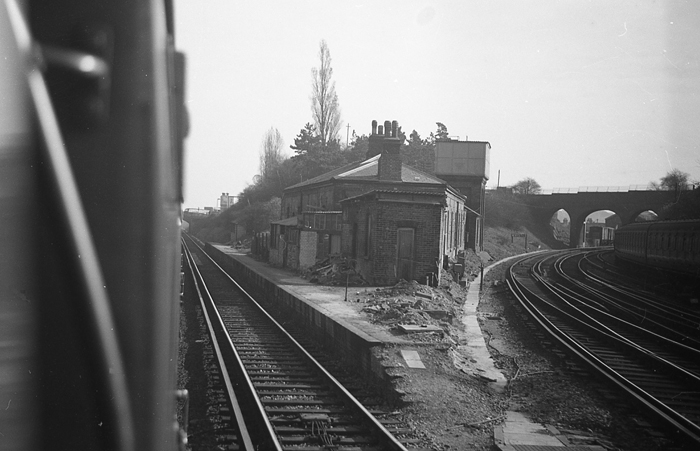 This view shows the original Swanley Junction station buildings and platforms still sandwiched in the fork of the diverging Chatham and Bat & Ball lines. The footbridge and canopies (which, themselves, were later features) are long gone, but the water tower, complete with tank, was still standing. Later structural additions, made after closure, can be seen upon the platform, on the left-hand side of the former station building. In the background, on the right, can be seen a "whistle" board, and beyond the three-arch bridge is the goods yard. The track layout here was extensively modified in 1939, which involved making a four-track approach to the replacement Swanley station from the junction. © David Glasspool Collection 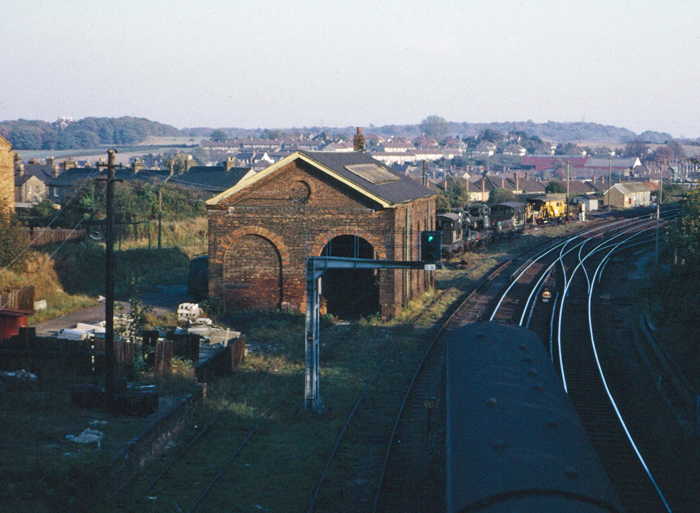 The goods yard of Swanley Junction, complete with original goods shed, was still in existence in 1971, but by this time had become home to departmental stock. The site was situated on the "down" side of the departing line to Bat & Ball, which can be seen curving sharply to the right in the above photograph. © Tom Burnham 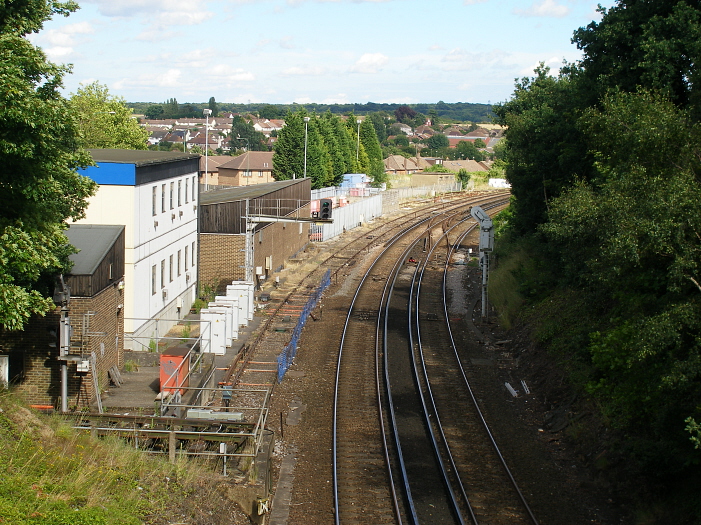 Fast-forwarding to 2008, fragments of the former goods yard could still be picked out. Two sidings remained, and these had been absorbed into a training compound for ''Westinghouse Rail Systems''. © David Glasspool 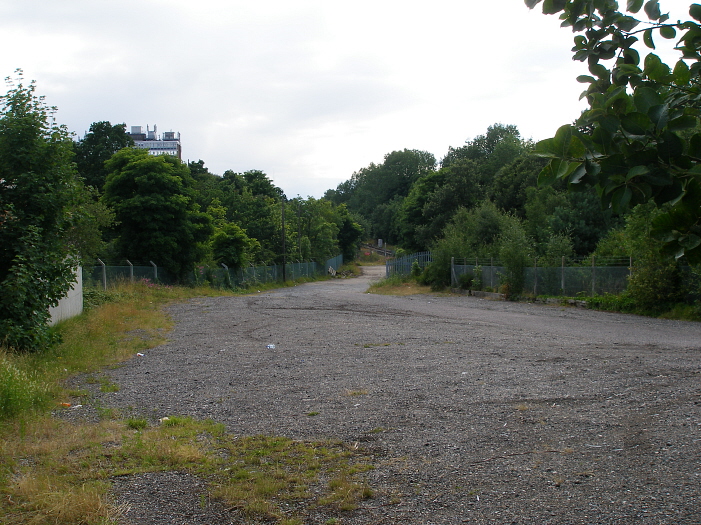 A westward view shows that an approach road to the former Swanley Junction station site still exists, for use by Permanent Way staff. Not a brick remains of the platforms and their sites have now returned to nature. © David Glasspool